In September of 1814 another battle occurred on a different island in the Mississippi, Credit Island. 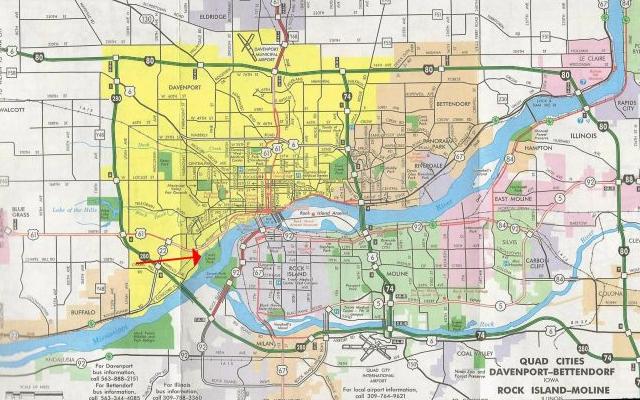 Major Zachary Taylor was sent up the river with a force of 430 troops and eight boats, with orders to destroy Saukenuk and the other villages along the Rock River.  His orders were to sail past the villages during the day, then sneak back at night under cover of darkness.  That plan was altered because Major Taylor perceived a trap.  He decided on a trap of his own.  He put up a white flag, his intention being to lure the Sauk into a council and attack them then.

The natives were not fooled by this ploy.  Major Taylor camped on Credit Island, assuming that his force outgunned the forces of Black Hawk.

The American forces were attacked in the night.  They remained in their boats and returned fire.  The following morning, the Americans counterattacked and were able to clear the island.  However they were soon surprised by cannon fire from the British, who had captured the fort at Prairie du Chien.  The British, led by lieutenant Duncan Graham expected the Americans to attack the fort there, and had encouraged the Indians to harass the American troops.

Zachary Taylor and his troops lost 14 men, and decided to retreat back down the Mississippi, where they set up a fort near the Des Moines River.

This is the official White House portrait of Zachary Taylor.  The source is Wikimedia Commons.

Like William Henry Harrison, Zachary Taylor served only a short term as president because he died while in office.

Nature photographer from central Iowa.
View all posts by the roused bear →
This entry was posted in American Indians, Black Hawk, The History of the Butterfly and tagged Black Hawk, Iowa History, War of 1812, Zachary Taylor. Bookmark the permalink.