How Could They Miss the Gray Copper?

One of the themes of my blog is the history surrounding the discovery of a small butterfly, Oarisma poweshiek, or the Poweshiek skipper.  The original description of the butterfly was published in 1870, and authored by Henry W. Parker.  I believe that Henry’s wife was at the very least an equal partner in the discovery, or that maybe she discovered it herself.

I have been trying to write a narrative of how it happened, and have been having a little bit of fun with that.  I thought I would throw in a description of other butterflies and maybe some of the flowers that would have been blooming on the prairie at that time (which was June 17, 1870), so I started by looking at a number of my photographs from around that date.  I ran across some photos I took on June 18 and June 19, 2010, at the Conard Environmental Research Center (CERA) near Kellogg, Iowa.  CERA  is owned by Grinnell College, and has a nice lab/classroom area, and a pretty good area of reconstructed prairie and savanna.

I noticed that I had a lot of gray coppers in the photos I took those days, so I looked on the list of Iowa butterflies that had been published earlier in 1870 under Henry’s name to see what the gray copper was called then.  But it wasn’t on the list. 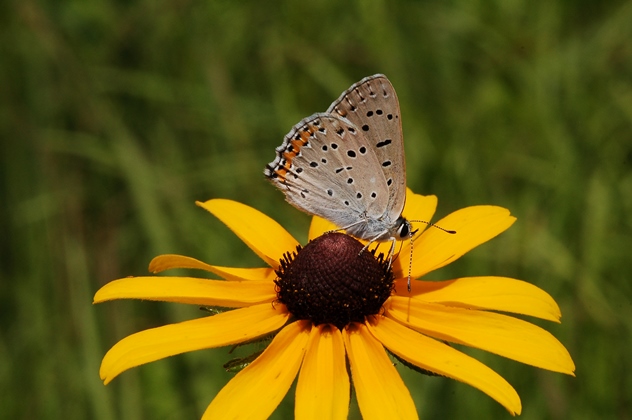 CERA is only 12 miles from Grinnell.  The habitats around CERA now are probably similar to what was around Grinnell in 1870.

So was the gray copper a rare butterfly back then?  My experience with this butterfly now is that it is not found everywhere–mostly on good prairies or wetlands.  But where it is found it is not rare, and certainly is difficult to miss.  Why wasn’t it on Henry’s list of Iowa butterflies?

I have a guess.  Turns out, the butterfly was originally described by Samuel H. Scudder in 1868 from butterflies collected in Iowa by J.A. Allen.  The original description can be found here.

Then, in the Transactions of the Chicago Academy of Sciences, Volume 1, (January 1870), Mr. Scudder published the first list of Iowa’s butterflies.  The link can be found here but you have to go to pages 326-337.   That list included 46 species, four of them new to science.  That list included the gray copper and the Iowa skipper.  The Parkers might have been kicking themselves for not publishing Iowa butterfly lists or descriptions earlier.

So “Henry’s list” was an attempt to play catch up.  Although last night I think I came up with another reason it was published…

1 Response to How Could They Miss the Gray Copper?