Yesterday we had two crocus flowers blooming–both yellow.  Today the yellow ones are blooming, and a couple of purple ones have popped up as well.  I got a chance to enjoy my hobby of photography today, but I also got a little nostalgic for how things used to be.  Digital photography has some great advantages, but I really miss taking photos with my old film camera, which was a Pentax 67.  Let me try to describe why.

The 67 was a beast to lug around, and I use a big heavy Gitzo tripod as well.  Combined weight for the camera and tripod was probably around 15 lbs.  But I would find a flower (and the woodland wildflowers are a lot more fun), attach the camera, and position the whole setup to try to get the best angle.  The tripod has a short center post, so I can get down low to the ground–touching the ground if the photo was vertical (or “portrait” format) and a few inches above the ground if the picture was horizontal (or “landscape”).  I found that I preferred to shoot most of my pictures in the vertical, so by default most of my photos were portrait format (even my landscapes), and only when the picture demanded it did I shoot the landscape format.

This was slow photography.  I could take ten or fifteen minutes just to set up one shot.  And I loved it. 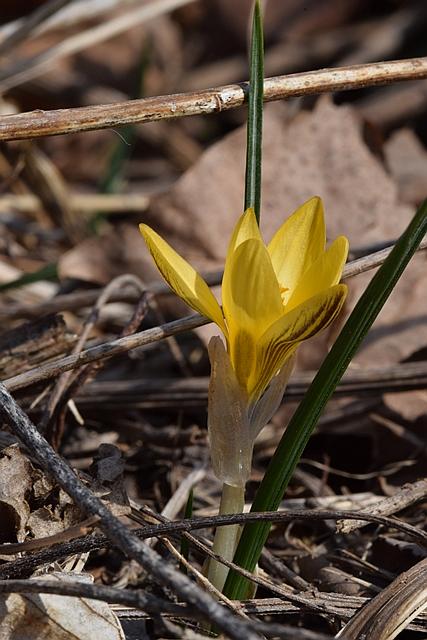 Today I used the same tripod but I use a Nikon D5300.  I tried to use a similar technique to what I used to do.  The tripod still pushes me towards portrait format photos.  The camera does not take a shutter cable–instead it uses a wireless remote.  There is a tiny button under the lens that I have to press in order to use the remote.  Then I have to navigate a computer menu to find the proper setting for the remote.  It does work pretty well, but the setting will time out after a short period, and I have to keep resetting it to get it to work.  I always use manual shutter speeds and aperture settings on the camera which on the digital camera always seem more difficult to set than the film camera was.

That being said, I then used to have to take the film to a specialized dealer to get it processed, which could take anywhere from a few days to a week.  Then, with the cost of the film and processing, each photo I took cost me a little over a dollar.  And the picture was on slide film–making a print added extra cost.

Nature photographer from central Iowa.
View all posts by the roused bear →
This entry was posted in photography, Uncategorized and tagged flowers, macro photography, photography. Bookmark the permalink.

2 Responses to Fun with Flowers