For several weeks I had been planning on taking three days off and doing some trips to look for some of Iowa’s rarer butterflies, and just to get out in nature in general.  So I took Wednesday through Friday off from work.  But the weather did not cooperate.

On Wednesday the forecast for here was rain and 50’s.  I saw a forecast for the Keokuk area that gave a high of 60, so I took a chance and drove down to the Shimek State Forest near there.   The sun never came out, and the temperature never went above 52.  No butterflies.  But I did see some interesting galls in the trees around the trail. 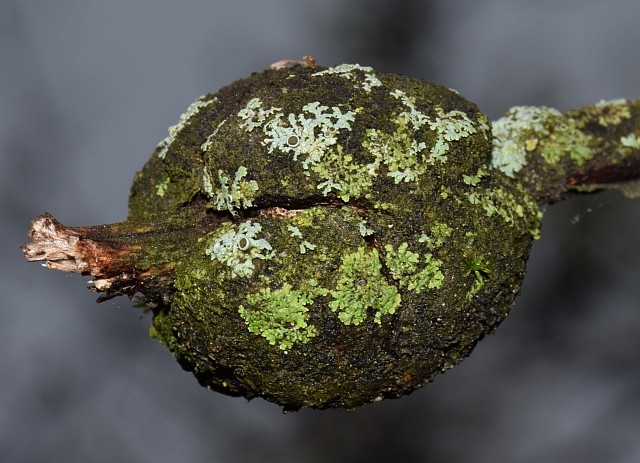 I emailed John Pearson with the Iowa DNR about the galls.  I was particularly interested in the fact that lichens and even some variety of moss were growing on the tree.

The galls seem to be on shingle oak, and John suggested that it might be “gouty oak gall” caused by cynipid wasps.  There is information about it here.  He also identified the lichen as Gray Rosette Lichen (Physcia aipolia).

I thought it was interesting that the lichens seemed to be quicker to colonize the gall than the bark on the stem adjacent to the gall.

As with nature in general, there always seem to be more questions than there are answers.  And the questions are a lot more fun.

Nature photographer from central Iowa.
View all posts by the roused bear →
This entry was posted in Biological diversity, plants, Uncategorized and tagged galls, lichens, macro photography. Bookmark the permalink.

2 Responses to Adapting to Conditions